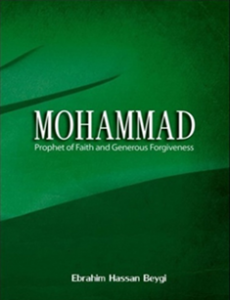 (Prophet of Faith and Generous Forgiveness)

◙ The Copyright was sold in England, 2013: Candle & Fog Publications.

◙ The Copyright was sold in Turkey, 2013:Ma’na Publications.

A Jewish man, on behalf of his noble master who was affiliated with the Committee or the Supreme Council of the Jews, is sent to Mecca as an agent or spy to collect information about the life and prophetic proclamations of an Arab man from an idol worshipping tribe, who presented himself as a follower of Ibrahim Khalil. The Jewish man is commissioned to stop such proclamation by any available means. Even to kill the Prophet or if he doesn’t deem the murder viable, shatter the Muhammad’s (PBUH) religion with the help of his friends in Yasreb. The agent acts according to the order of his superior and sends to him word – of – mouth reports related to the Prophet. The mission takes ten years and the agent, despite all seeds of hatred and hypocrisy dispersed among Muslims, cannot succeed, and defeated and tired, abandons his wife and child, and returns. And that is not possible, except with the unity of the Prophet (PBUH) and his comrades and their articulated reactions in response to every plot and planned division.

This is a realistic story. We are facing a real and truthful tale. But this real story has its own subsets. First, it is a historical and religious story and next, by the nature of the story it is a tale of beliefs. The language is simple and fluent and unofficial with its special charm. The narrative is linear and goes through the text without any kind of deconstruction in context. The author’s exploitation of the type of language and its relationship with the old date of the issue has made the text fresh and special more than anything else. In this novel, representation of the character is preferred to its description and the author, instead of repeated explanation and description, shows off all the character’s attributes ranging from mood and temperament, behavior, behavior, language, dialect, religion, etc. and through this, the character in its true meaning, is disclosed.