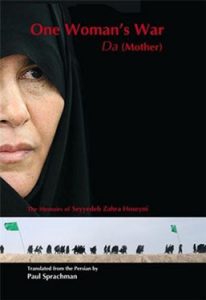 This book is the narration of the memories of Sayyidah Zahra Husseini of Iran-Iraq war which has been written by Sayyidah A’zam Husseini. Da means “mother” in Kurdish language. Through selecting this title for her book, Husseini has attempted to deal with Iranian mothers’ resistance during war time. The memories mentioned in this book happen in two cities, Basrah and Khorramshahr. The years during which Khorramshahr had been besieged by Iraqi forces form the central axis of this book. In that time, Husseini has been a 17- years-old girl and reiterates some parts of the history of the war. Paul Sparkman, the American author and translator, has translated this book into English. Moreover, it has been translated into Turkish and Urdu. Husseini has declared the enemy’s negative propaganda and their soft war against Iranian Islamic Revolution as the main impetus for writing the Book of Da (mother).