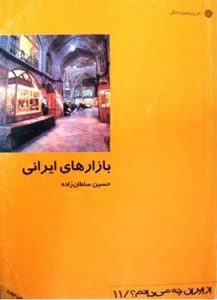 In this book, the history of Bazaar goes back to ancient times and then continues to Medes Period and finally to Islamic Period. Some elements like ornamental shells and stamps on the utensils have given rise to the idea that trade relationships must have existed in various parts of Iran and inevitably, industrial workshops should have taken root around those areas. According to these urban activities, one can assume that the Bazaar or some production-commercial zones gradually established in an independent area inside cities. An example of the civilizations of the time with zones similar to a Bazaar is Ilam. Bazaar formed since Medes Period till Islamic Period and it started to take shape from Achaemenian and continued to Parthian and up to Sassanid periods. An example of a Bazaar in that period is Dora-Europus

This book has summarized several full texts in a compact edition. It approaches the subject from various aspects and in every chapter offers information on Iranian Bazaars and businesses. There is an epilogue at the end of every chapter which depicts the current status of Bazaars and their future outlook. This collection covers 18 sections in 5 chapters as follows:

Chapter 1: Definition of the term Bazaar  , Historical background of bazaar, Social role and function of Bazaar, Denomination of a Bazaar

Chapter 2: Factors affecting location of activities, Management of Bazaar, Maintaining law and order in Bazaar. Example of laws and regulations of Bazaars.

Chapter 3: Hierarchy of Bazaar locality in a town, Status of the main permanent Bazaar of the town, Expansion of main Bazaar

Chapter 4: In this chapter, some of the urban elements and spaces and their relation to Bazaar are explained such as: main lane (Raste), byway, hall, quartersides (Charsoo), circle, counter front (Jelo khan).

In the next section, architectural elements and spaces are presented such as: cell, guest house, mall, Caesarea, service spaces and public spaces.

checkerboard city at the time of Roman Occupation.