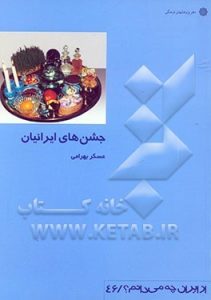 In the book, at first the calendar and background of Iranian celebrations are presented and some points related to the Iranian calendar and its developments, naming days and months in ancient Persia and the features of holding celebrations and expressing happiness among Iranians at the time are made. The next subject of the book is about religious celebrations where the writer first introduces ceremonies and celebrations titled as “Gahanbars”. (Gahanbars are a series of celebrations commemorating six God’s creatures who Iranians would pray to, protect and respect as an obligation.) The writer then gives information about Norouz Celebration and cites it as a national and religious celebration. Non-religious celebrations and those related to other religions and beliefs are the next subject of the book. The writer believes that “Iranians were a nation who based on the remained documents would hold celebrations on small and great occasions. Upon the introduction of Islam into Iran, special Muslim celebrations such as Eid Qurban and Eid Qadir Khum were added to these celebrations.” In this book also some information about Muslim, Jewish, Assyrian and Mandaean Iranians is presented. This book is another one of the book series “What do I know about Iran?” in which each book deals with one of the subjects that have to do with Iran.

About the Author: Askar Bahrami (1967-1999).He is a writer, translator and a faculty member in the Foundation for the Great Islamic Encyclopedia. Some of his works and translations are as follows: The Mythological History of Iran; Iranian Celebrations; The Most Ancient Songs (Translation); Zoroastrians, Beliefs and Religious Practices (Translation); Stone Age (Translation).