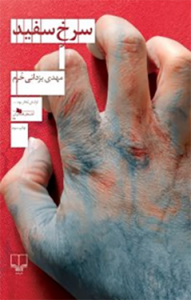 A thirty- two year old karate player knows well that it is not a matter of importance for anyone anywhere in Tehran that for a low-ranking clerk of the Office of Statistics getting the black belt of karate is as vital as bread and butter. A low-ranking clerk that has to attend the office from 8 A.M. in Fatemi street and buys a bottle of mineral water and sometimes a magazine like Mehrname from the stall standing at the beginning of Rahi Moayeri street before entering the office. Then, until 4 P.M. he has to work with the numbers and answer the phone like most clerks throughout the world since the beginning of the world until now. For that low-ranking clerk of the Statistics Office who loves Japan, Samurai and lost ghosts in the stories, it is beyond his understanding that above his head on the entrance door of his club two ghosts are sitting that are wandering around in Tehran for awhile. One of them is the ghost of a liberal poet and the other a wicked ghost with a spotted face… the low-ranking clerk arrived so soon by the club entrance and is tired of shaking because of sitting on a cement platform and staring at a steam waving in the darkness of the dust and getting lost in the center of shops lights… He is not the only person who has to have a test for black belt. Most probably, if he stays in that place a little more, he will feel asleep and cannot notice the reverence of a big stork that is warming his old nest on a brick old and useless chimney of a dry-cleaning with its body… The stork is one of the last reminders of its generation… The residents of that neighborhood know it well and the old men that are still in the Muslim habit of praying in the mosque and old residents of that neighborhood still believe that it is a sacred animal that it has to be fed and not to be bothered…. .

The centrality of the novel is a martial art practitioner that had to fight 15 times to get his black belt and each individual of his fights is the beginning of a new story. The novel censures Leftist political groups in Iran, Leftist literature, Leftist politics and Leftist philosophy opponents.

About the Author: Mehdi Yazdani khoram (1978 / Iran) has published different interviews, articles and writings in literary page of different newspapers of Iran . He is mostly reputed for his literary criticism. He also collaborated with Nafe magazine as a member of editorial council and literary councilor. Among his works ‘I Love Manchester United’ (which won the literary prize of Haft Eghlim va Bushehr (seven lands and Bushehr) and was a candidate for Prizes of Mehregan and Roman e Motefavet (a different novel)), ‘According to the Weather Forecast Tomorrow This Damn Sun’ (the best novel in Roman e Motefavet (a different novel) Literary Prize) can be referred to.