Gissoo and the Magic Lamp 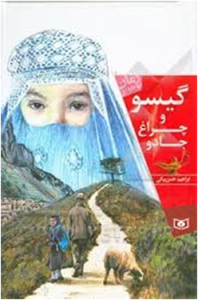 Gissoo and the Magic Lamp

Gissoo, a Slim Afghani girl, one day finds a magic lamp which is considered a savior angel. It changes her life. And through adventures that take place, she finds guidelines for her life. Actually, however, this magic lamp does not have any magic.  But it only helps children how to live a better life.  Since then after people heard Gissoo’s story, they wished the story’s magic lamp to appear in their lives too, to materialize their dreams. Magic Lamp is a story written by Hassan Beigi, who has comingled a fiction with reality. The genie of the magic lamp  goes to the children who strive to materialize their dreams. This character rather than practically realizing children’s dreams helps them on their way to achieve their goals and earn what they wish for.

This story is about an Afghani girl who lives in Iran. Her father goes to Afghanistan to take care of some affairs but fails to return (to Iran). Gissoo is restless and very eager to see her dad. Then a magic lamp appears on her way. Subsequently, an exciting journey takes place to unknown lands. Gissoo and the magic lamp add to attractive adventures with Afghani characters and their fascinating mysterious land.  Particularly that the leading character of this fiction appears to be an innocent eleven-year-old Afghani girl. In this novel, the hardship of life during war and immigration and the oppressed Afghani children are narrated while describing the destructive war and the unity and attachment of the people as well as POW’s small and big wishes during the war and immigration.

Excerpts: In a part of “Gissoo and the magic lamp” goes like this: That night Gissoo kept staring at the magic lamp which placed on the top of the closet. Now she has a new friend, a friend who is alive and talks to her and give s her hope, a friend who is supposed to materialize her dreams. She wishes to talk to her friend . Still, there are many  unsaid things she wanted to say. She can only talk with the magic lamp when she’s alone. The magic lamp had emphasized that nobody must learn about “our relations”. Even Gissoo’s mother who is standing in the corner of the room and is busy cooking cannot know. When her mother comes home in the evening at sunset she starts washing the dirty clothes, then she peels potatoes and onion. Now she’s frying them. Her mother looks at Gissoo and says: “if you find it boring turn on the TV”