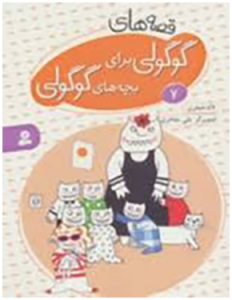 ◙ Nominated as the best book in the children’ Festival(2017)

Once there was a donkey who wanted to become a man (a human being). The donkey went to a witch and asked her to convert him into a man. The witch said: “I will do this for you under one condition. You must bring me a bag of money.” The donkey left and worked hard to earn money. He earned so much money that he could bring it to the witch. He filled a bag with money. But he had grown too weak and slim to carry the bag. The witch converts him into  an old weak man. On his way back to the witch he saw a Pony donkey who asked the donkey to play with him. The old man started playing with the pony but he fell down and his bones broke down. So he returned to the witch asking her to convert him back to what he was before (to the original animal).

The collection of the stories of Goougooli for Goougooli Children include 10 volumes and each volume has a few short stories and fictions for children. This collection includes short stories and fictions…. and there subject and the characters are diversified the writer has tried to bring the social and moral concept to the children by writing in a sweet attractive eloquent narration nearly 50 stories not only the readers will enjoy reading his stories because of their what takes place in the stories but also some of them have ethical and pedagogic concepts which the reader learns .