he Legends of Three Girls 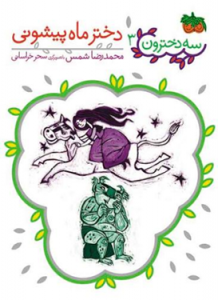 he Legends of Three Girls (3Vols.)

This series is amongst the kind of titles which not only is fit for younger adults, but also the adults can relate to the stories as well as children. A mixture of world renowned fables brilliantly woven into old Persian legends. That the stories are based on humane feelings of love, loss, betrayal, loyalty, honesty, and as such, has added a tremendous superiority to it, for a person no matter how young, will encounter such dilemmas sooner or later. Shams has this rare ability of mingling stories and create a brand new essence, which becomes the reason why his titles are so well received by the readers. In this series, we read of lives of three girls, whose stories may seem repetitive, but the twists and turns they gain, is like no other fable we have read. For instance, we all have heard, read, or even seen the story of Cinderella and her cruel stepmother or The Sleeping Beauty or Rapunzel and the Witch, but combining it with ancient Iranian myths spicing it up with princes and spells would prove a new experience.

Book one of this series is called The Girl with the Flower Laughter. Honest parents, an evil witch, a beautiful girl called Golanr (whose laughter produces flowers and her tears, the pearls), a prince, and an aunt hateful as the witch are the characters of the story. Golanr is kept in a tower by the evil witch and has long hair, just like Rapunzel. However how the story unfolds is not that easy to predict. And that’s perhaps one of the great abilities of the author: It’s never easy to guess the ending and in not too many pages of the book, there’s no single page to be dismissed, for you may just miss a clue to unsolved the mystery that is his story.

Book two is about a prince who has fallen in love with an image of the most beautiful girl .In the world, who is in desperate need of saving from the most horrific witch. On his way, he must face the horrendous traps, giants, hags, spells, and all of t nasty tricks you can imagine. It reminds us of the many princes and beautiful girls who have been separated from each other by magic and evil witches and cunning creatures. Along the way, the prince who is utterly in love, is fooled by the disguise of the witch and his path is hindered couple of times. The mingling of Old Iranian love stories and legends such as the Sleeping beauty has added to the fantastical world of Book Two. Despite other stories, the reader cannot guess or predict the happy ending of the story. When there is no hope, the dim light of the truth will shine through: the prince and the girl after much hardship and deceptions of the evil witch, with the help of nymphs and sea creatures, and of course, the girl’s beautiful voice is united once and for all.

Book Three, is a mixture of one of the oldest and most famous Iranian fables: the girl with the moon on her brow and her mother who turns into a beautiful cow. Moon and cow are very special and respected in most of the ancient cultures and civilizations in the world. On the other hand, we all know the story of Cinderella, her cruel stepmother and stupid sisters; well, we have all of them in this book (though only one stepsister) and many more daring adventures and puzzles the girl (whose name is Shahrbanoo). A talking cow, a well, the wind, and of course the giant who lives in the well are other characters of the story. The giant who lives inside the well, talks in a funny way: he says the opposite of everything he has in mind. Shahrbanoo is kind to the giant and in return, she has a moon on her brow and a star on her chin. Her stepsister, out of jealousy, does the same thing. However, she is cruel and mean to the giant and in return, her face becomes black and a horn grows on her chin. The rest is a Cinderella story, though it has its differences: Sharbanoo dies and comes back to life and has a son and her stepmother and stepsister are punished and after quite a ride, Shahrbanoo, the well, the giant, and the cow (who turns out to be her mother) and the prince live happily ever after.