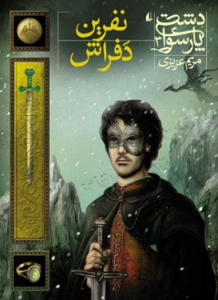 The Series Parsua Prairie is indeed a new experience for readers, offered by a very capable author, who has created a land of her own. In this series, people, demons, landscapes, and narratives, entangled together by a series of unforseen turn of events, are all one of a kind. Incidents and suspensions take place with surprising effects. There are no definite bad and good, but a spectrum of colours and adjectives. Loves and sufferings are laced in a narrative so vivid and influential that very soon the reader feels as though he has entered a world of his own, in which he must fight to survive and deal with ups and downs of the story. Brilliant characters, brand new atmosphere, and familiar yet unfamiliar legends and myths altogether create a unique experience of readership, which can be relatable to all cultures. Therefore, this series is truly a souvenir from contemporary Iranian literature for young adults from around the world.

Book 1: In Vicinity of Silence

The book starts with the story of a girl called Mandana. She lives with her parents. A boy called Abtin live with his parents in the same neighborhood. Abtin appears to be a loner, for he spends most of his time on his own. Once, when other boys in the alley want to abuse and persecute Mandana, Abtin interferes and tries to defend her. He takes one of the bullies to the back of alley and frightens him in a mysterious and dreadful way. The bully runs away and later, speaks of magic and fear.  Mandana turns 18 and Abtin and his family leave that neighborhood. Mandana and her family go on a trip and their car falls into a valley. Her parents die and she does too. However, she is revived later, by a wizard called Razian. Therefore, Mandana has to live in the land of wizards and witches. She is informed that if she returns to humans’ land she will die. During the course of the story, we find out that after being revived, she has gained magical powers.  Very soon we find out that Razian has seen in her dreams one night that she should be there at the valley to save someone: that “someone” is Mandana. Razian is a doctor, who works for herbs to make potions and remedies. Mandana becomes Razian’s assistant and one day, Abtin sees the two together. He is also Razian’s assistant. Abtin’s mother is noble and genuine witch, however, his father is a regular human. This all means that Abtin is a hybrid or half-breed. According to wizardry laws and regulations, hybrids are not allowed to use magic and their special powers. Mandana and Abtin live a peaceful life with Razian, although according to the rusty and old laws of wizards, hybrids are unoriginal, sinister, and of bad omen. They are ridiculed and threatened by other original wizards.  Here comes the horrible incident. Each year, a contest called the Best Wizard Contest is held. Abtin and Mandana must participate in the contest and win, in order to prove themselves to the society of skeptical wizards; otherwise, they will be killed. The due take part along with three other wizards. Abtin and Mandana gradually dominate over the bad and evil features of the contest. They gain special powers and with the help of their human instincts, high values, and recognizing the good, appear in the contest.  After a great deal of breath-taking adventures, the first book approaches the end. They have not yet found The Apple to leave the contest. There’s also a vicious wizard, who kills Abtin and captures Mandana and Razian at the end of Book 1. But Abtin lives through special magic.

The protagonist of the series, Mandana, is caught in the Coffin of Fear. She is saved by someone, who she later finds out was Kianick. In this title, we have five characters: Mandana, Kianick, Abtin, Banafsheh, and Nariman. They are all stuck in the Enchanted Forest. They are still trying to find The Apple. After Mandana is saved, they go back to finding The Apple. Ultimately, with the help of a citizen from Urtaj City they find The Apple and an ancient castle.  There they face an evil woman, whose name is Gorgona and is a servant to Shargon (The Black nWizard). Gorgona is a woman with dangerous eyes and hairs of snakes. At the end, Gorgona petrifies herself by looking into a mirror and seeing her own reflection. Mandana once again becomes the heroine and saves her friends. However, Gorgona performed the magic of the Black Spear on Kianick and as a resuld, he suffers a deep and dark wound on his shoulder. He is now struggling with darkness for the rest of his life. Ultimately, these five wizards gain the Apple and return to the city. However, Shargon, determined to kill Mandana, does not leave her alone. Until now, Kianick’s mission was to eliminate and kill Mandana, but after the contest, Shagon directly and through bat-men enters the field and attacks Razian’s house. Razian is then captured, but Mandana is saved by Kianick and takes her to his father’s palace. When Kianick was in the Enchanted Forest his father was killed. From now on, Mandana’s life as a fugitive and prisoner takes another path. She’s dubious about Kianick. She feels a great deal of love and affection towards him, but is afraid of him at the same time. The five wizards gather again in the quest of finding out why Shargon wants Mandana dead. Now the city is completely in the hand of the evil group. Darkness rules over the city and the group finds out that according to an ancient prophecy, Mandana is a quadruble, who can destroy Shargon for good. After a great deal of combat and fights with the evil forces, and for the sake of her friends, being captured, Manada decides to surrender herself to Shargon. They meet near a lake and Mandana, with the help of Kianick, Banafsheh, and Nariman, defeat Shargon. All the other prisoners are freed, except for Razian.

The story begins five years after Shargon’s death. Mandana and Horn the Sparrow live in Razian’s cottage. Horn is a citizen of Urtaj City. Most of Mandana’s friends are now married. Kianick has left for faraway lands. Although Mandana is now a national hero, she still believes that Razian is alive. She lives her life in pain and misery. She has no interest in festivities and interacting with others. Mandana thinks that Shargon, or evil as a whole, has not been destroyed completely. She feels its presence in wizardry society and in her heart as well.  Meanwhile, is a parallel narrative, we find out that Shargon is still alive. He lives inside Kianick, through a dark magical invention of his, called the Black Spear. Kianick returns to Parsua Prairie and tries to get close to Mandana. He attempts to kill her several times, but the school’s masters and a group we come to know as Niazan, save her life. Gradually the romantic relationship between Mandana and Kianick rekindles. Each time Mandana refuses to compailn agains Kianick and decides to act against eliminating him. She knows that Kianick’s attempts on her life are not deliberately his own decisions, but due to a force within him and unwanted will.  Moreover, Mandana is in touch with Razian in her dreams and through her mind. When Razian is tortured by Shargon, Mandana too feels the pain. There are many relationships between Horn and other students and other characters from China and Ireland also enter the narrative.  At the end, during the celebrations of Nowrooz (Persian New Year), Kianick unwillingly tries to kill Banafsheh. She is saved as a result of Mandana’s and an Irish doctor’s vigilance. Kianick, bothered by his inner slavery by Shargon, decides to kill himself. At the end of this book, everything ends in a limbo. Is Kianick really dead?