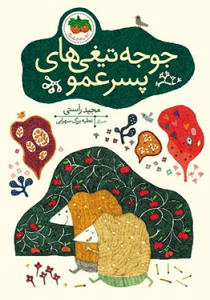 This is the sweet tale of two Porcupines, who happen to be cousins. They’re on their way to reach the Porcupine City. One is called this and the other one, that. In the text’s story, they are indicated with colors, one orange, and the other, purple. They want to rest, but they both move around and decide to fight: one spine from that and the other from this, while they’re both hiding on the two sides of a big rock. They threw spines at each other and as the night fell, they both went to sleep, without knowing that each and every last one of their spines had been thrown. The next day they started missing one another. They collected the other’s spine and set out to look for their cousins. They both rounded the rock but never reached their cousin. At sun down, they heard a crowd calling their names. The citizens of Porcupine City were looking for them and eventually, found them. The porcupine cousins are once more reunited.