telegram
Home
books
The Giant and the Bicycle

The Giant and the Bicycle 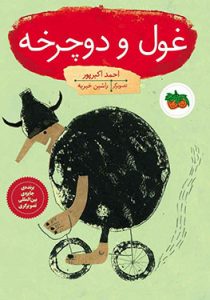 The Giant and the Bicycle

A kind father wants to tell her little daughter, Dorsa, a bedtime story. He will tell the story, while Dorsa’s mother will draw the pictures of it. But Dorsa wants to participate in the storytelling too. So she constantly interrupts her father and tries to change some parts of it as she wishes the events to happen. The story is about a small boy, who plans to steal a bicycle from a shop. He steals the bicycle when the shop is crowded but then, he is trapped all the other bicycles’ falling down. The small boy tries to escape. Dorsum immediately calls the police and finally the boy is arrested and taken to prison. Dorsa feels sorry for the boy, when she realizes that she was the one who called the police, and  asks her parents to help the boy. It is dark and they have to be very careful, as they don’t want to wake up the prison guards. They have to run away when suddenly a wild wind blows at the doors and all the night guards wake up. Finally the prison guards lose track of Dorsa and the little boy in the jungle. After a short while, a little giant appears and takes her and the boy to his house. Both children are terribly scared, but the baby giant seems friendly and shows the pictures of all the bicycles he has drawn on one of his room’s wall. When the baby giant asks the boy’s name, Dorsa is forced to call him Sina; her own brother’s name. She never got a chance to ask the boy’s name. But suddenly the baby giant decides to eat them all. How can Dorsa possibly change the story ending and rescue their lives? Although the baby giant and Sina become friends, Dorsastill wants to make sure everything is all right. She makes her best to persuade her mother and father to help Sina in the story they are writing and drawing. When her father promises to buy a bicycle for Dorsa, she becomes excited and…