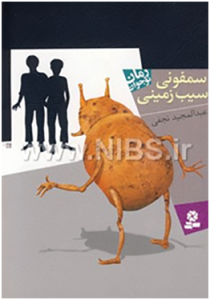 Rasoul, Davood and Jebre’eel are three teenagers who live in Halabi-abad. For a long time, they have been thinking about Dadvash and his Cottage. They have been wondering who he is and why he is living alone. “What is the beast which he keeps in his cottage?” they like to know.  At the beginning of this page-turner novel, the curiosity of these three teenagers, who are friends, attracts the reader’s attention and it gets his mind involved in the story. As the adventure advances, the reader follows the story enthusiastically /eagerly trying to find the answers to the questions formed in his mind/while his willingness and interests in reading the book further increase.

The Symphony of Potatoes has a very simple eloquent prose and is fluent and good to the reader’s eyes. Everything starts from a (big) sack of potatoes. He is separating the potatoes which are sprouted.  He pays particular attention to the shape of the potatoes that resemble weird deformed creatures. The eagerness to write is awakened in him and thus the idea and eagerness to write, end up in the creation of the Symphony of a Potato. The writer talks about this adventure in the middle of his book “Shazdeh”, (this deformed potato) is the creature that Dadvash has been keeping in his cottage like a child. Shazdeh is an invader from the outer space.  Other outer Space Invaders are supposed to come down from the space to the Earth to take him away. But it’s better that you follow this story yourself so that you will learn that an outer space invader who neither talks nor walks nor lives like us people from the Earth can occupy some people’s time of loneliness. How can he ease their minds and comfort them?