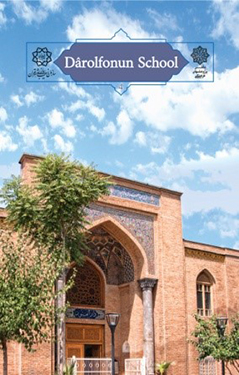 In the 18th and 19th centuries, traditional education at maktabs (old-style elementary schools) and religious madrasas was limited to literacy (reading and writing), which was in the best scenario accompanied with religious teachings. Of those who could pass this stage, only a limited number of students with enough financial means and extreme interest in learning or those coming from religious families would go to big cities with accredited madrasas in order to climb up the ladder of success. As a first step towards modern education in Iran, Dârolfonun School was planned and established in 1849 in tandem with the emergence of new symbols of civilization; social, cultural, and urban transformations; and construction of new public buildings in Iran. Later in its lifetime, Dârolfonun became the origin of significant changes in the Iranian society, since many distinguished Iranian artists, physicians, engineers and scholars graduated from this school. The name Dârolfonun is forever linked with that of Mirzâ Taqi Khân Farâhâni, better known as Amir Kabir – a reputed prime minister of the Qâjâr era who continues to be one of the most admired figures in the long history of Iran. He sent an envoy to Austria to recruit teachers, who returned with a group of seven instructors with various specializations, including infantry, artillery, cavalry, mineralogy, pharmacy and medicine.

Though voices of teachers and footsteps of pupils no longer echo in the empty halls and classrooms of the school today, Dârolfonun continues to be acknowledged as a notable and prestigious institution in the minds of many Iranians.

This book covers a timeline of the formation of modern schools in Iran, and discusses the historical and social environment which resulted in the conceptualization and establishment of Dârolfonun School, as well as its architectural characteristics and schooling methods.

The book in hand is the 4th volume of a twenty-title series published as an output of Tehran Studies Project at Cultural Research Bureau. These books were designed to provide both authentic and interesting reading material on the historical, architectural and cultural aspects of Tehran’s prominent monuments and urban spaces. The series was recently translated into English for English-speakers willing to expand their knowledge about the history of the present Iranian capital.

Timeline of modern schools in Iran

Anatomy of the monument

Architectural features and situation of Dârolfonun in the urban fabric

Nasser Pazouki (1958/Firuzkuh) holds an MA in Archaeology from Tarbiat Modarres University and worked as a university professor from 1993 to 2012. Pazouki has published more than 25 articles and 9 books on archaeology and cultural heritage subjects, as well as over 300 articles of the Encyclopedia of Great Tehran. He has also been responsible for several research and restoration projects mainly in the historic sites of Tehran province.

Among his books are: