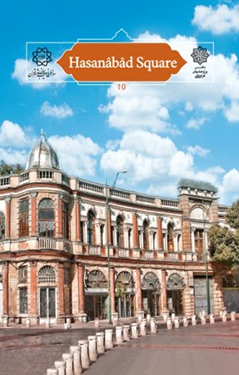 Among the historic squares of Tehran, Hasanâbâd Square stands out due to its special design: a round open space, surrounded by four buildings, with curved arches, stucco columns, embellished Corinthian capitals, and European-style bell-shaped domes, displaying a different style of vernacular architecture. This manifestation of a square is essentially different from the historic plazas of Isfahan, Yazd, and Kerman. The architecture of Hasanâbâd Square, a place intertwined with the memories of Tehran residents, resembles the European-style architecture which can also be observed in old photos of other locations in Tehran. However, many buildings, the memories of which were eternalized by photographers such as Khâdem, Tahâmi, Pâkzâd and others, no longer remain to recount the tale of the city to its future inhabitants. Hasanâbâd square is one of the few works which have survived the test of time to carry part of the memories of the city; A square named Hasht-Gonbad (eight-domed) by people of Tehran, or as they used to call it in Tehrani accent “Hasht-Gonbaz”. After an overview of the toponymy of Hasanâbâd Square, its historical background and the urban fabric of the neighborhood, the book discusses architectural properties of the square, the changes it has undergone over time, and the measures taken for its restoration and preservation.

The book in hand is the 10th volume of a twenty-title series published as an output of Tehran Studies Project at Cultural Research Bureau. These books were designed to provide both authentic and interesting reading material on the historical, architectural and cultural aspects of Tehran’s prominent monuments and urban spaces. The series was recently translated into English for English-speakers willing to expand their knowledge about the history of the present Iranian capital.