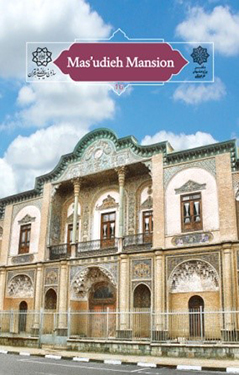 Mas’udieh Garden used to be one of the garden-mansions of Dowlat Neighborhood in northern Tehran during the Nâserid era. The property was built in 1878 by Mirzâ Mas’ud, a son of Nâsereddin Shah’s.

The book in hand is the 16th volume of a twenty-title series published as an output of Tehran Studies Project at Cultural Research Bureau. These books were designed to provide both authentic and interesting reading material on the historical, architectural and cultural aspects of Tehran’s prominent monuments and urban spaces. The series was recently translated into English for English-speakers willing to expand their knowledge about the history of the present Iranian capital.

A brief description of Mas’udieh Complex

Major changes made to Mas’udieh Complex

He was in charge of research, planning and implementation of hundreds of restoration and preservation projects around Iran from 1953 till 2007. He served as the Deputy Manager and Vice President of the Iranian Cultural Heritage Organization from 1987 till 2000. He was also Head of Iran ICOMOS and a member of its founding board, as well as a founder of the Iranian Cultural Heritage Organization. Among his many scientific roles were: scientific secretary of several international and national conferences, founder and editor-in-chief of Asar Quarterly which included around 6,000 pages on cultural heritage subjects in its 41 published issues, and professor of architecture and restoration at several universities in Tehran, Kerman and Isfahan from 1976 till 2007. He also received many awards and acknowledgements from Iranian organizations, as well as the International Award for Architecture for the planning and implementation of restoration projects of Hasht-behesht, Aliqâpu, and Chehelsotun in Isfahan in 1980, carried out in cooperation with the Italian Institute for Middle East and Far East.