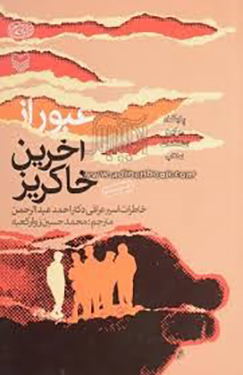 In the book “Crossing the Last Embankment”, the writer, who is from Iraq and participated in the Iran-Iraq war as an Iraqi soldier, recounts his memories of the final moments of the war between his country and Iran, when he and his injured friend surrendered to Iranian warriors. He, who has participated as a physician in the war, has a detailed, accurate, and out-of-the-box military view. He examines events with a different look and the scrutiny of physicians. In his narrative, there are streaks from a human perspective. On the other hand, wherever he feels that the audience needs more explanation, he describes and analyzes the events. The book has been written with an eloquent, sweet and charming language. One of the interesting points of this book is its end when this physician joins Iran’s warriors and provides some interesting and notable information on the situation of Iraqi siege in Khorramshahr.

The book is set in 14 chapters. In the book, referring to the early years of the war and the historical debate about the problem of the earth and water border between the two countries, the writer deals with the reasons of this war, called “the old problem” at the beginning of the book. In the chapter “The War Drums Are Sounded”, he deals with the days before the war and its backgrounds. In the chapter “Immediately toward the Hell” war begins, and the story of the occupation of Khorramshahr and Abadan in the next chapter of this book is being examined. In the following, there is the battle of Mukhara, the events of 1982, and ultimately the story of the captivity of the narrator.

The titles of the chapters of the book include:

An Iranian officer asked me in English about Khorramshahr. I also replied in English that all Iraqi forces were besieged and will come to you at noon on God’s will. Then he asked me, “You attained victory at the beginning of the war, how did you get into this situation??” I shook my head and said, “ان ینصرکم ‌الله فلا غالب لکمو ان یخذلکم فمن ذا‌الذی ینصرکم من بعده.”

I was only seven kilometers away from the shocking events in a country that until that day was a strange riddle to me. A lot of things went into my mind when I traveled 170 kilometers from Baghdad to Khanaqin, which lasted for two hours by car. What was happening that day in Iran was not clear to me.

Ahmad Abdul Rahman, who was arrested in May 1982 as a doctor by the Iranian forces, during his years at the battlefield, mentioned the points and events of his country’s eight-year war against the Islamic Republic. Abdul Rahman, who joined Iraq army in October 1979, after being dispatched by Iraqi troops to Khorramshahr, finally surrendered himself to Iranian troops at the last moments of the Liberation of Khorramshahr.