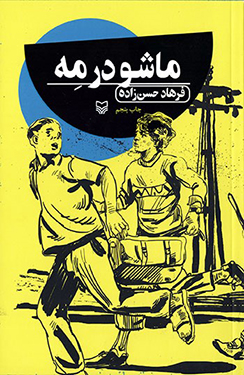 ◙ Based on this book, a serial was produced and broadcast on Iran’s television.

The book” Mashoo in Fog” is one of Farhad Hassanzadeh’s successful books (and bestsellers) that has been highly awarded by the readers as well as literary critics in Iran. The fifth edition of this book was published within a few years, and a hundred thousand copies have so far been sold out. This book has been awarded in a literary festival while a movie has been produced base on it. This novel includes 7 chapters.

We read in part of the book:

The door opened, and Habib came back out of the room along with his colleague, a tall women wearing glasses with her glossy golden hair woven from behind and thrown over her shoulder. Her white and large face reminded me of my fifth-grade teacher. He threw his short-sleeved pink shirt on her blue jeans. He did not notice us first. He picked up the phone and started greeting. When he saw us, he frowned; raising his eyebrows. He was gazing at us, but his look was not pleasant, especially his look on Sia with his bare feet twisted over each other, which was so excited to see her while inserting a finger in his nose and turning it carelessly….