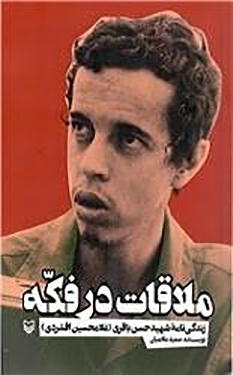 The book “Meeting in Fakkeh” begins with the memories of the childhood of Martyr Bagheri, one of the brave Iranian commanders, and then deals with the victory of the Revolution and eventually the presence of Hassan Bagheri as one of the main and most influential war commanders on the battlefields. The author has written this book using various sources, including the notes and reports of Martyr Hassan Bagheri, interviews with the commanders of the eight years of Holy Defense and his companions. Alamiyan in this work, by linking documentary material together, has been able to present a new, yet precise, narrative about the life of Martyr Bagheri. Though “Meeting in Fakkeh” deals with the life of one of the most influential commanders of the eight years of Holy Defense and tries to show his influence during the war, other aspects of the main character of the book are not far from the author’s point of view. The author has tried to not only pay attention to the martyr’s military aspect in this work but also to introduce other aspects of his personality. In this regard, the “Meeting in Fakkeh” shows a comprehensive picture of Martyr Bagheri. Martyr Bagheri’s activity in the newspaper as a journalist, details of his personal and private life, his personal notes, and the expression of his writing style, etc., are among the parts that we can mention in this regard.

The book “Meeting in Fakkeh” depicts one of the commanders of the eight years of the war. It is an easy reading book that, with the author’s efforts, has been able to accurately account Martyr Bagheri’s life. In this book, 65 narrators’ verbal memoirs have used.

The titles of the chapters include:

Sa’id Alamiyan
1955-Tehran
Sa’id Alamian has been working on the creation of literature in the field of Revolution and Holy Defense literature since 2005. One of his works is the “Mission on the Nissan Beach”, published by Sarir Publications, and ranked among the selected of the Eleventh Holy Defense Book Festival. His other work is “Wrench in Hand Division”, which was published by Fatehan Publications in 2011. “I say for the History” is another title of his books, published in 2012 by Soore-ye Mehr Publications, featuring the memoirs of Mohsen Rafighdoust. This book will also have a second volume to be published in 2014.
Titles of Some of his Works:
– Meeting in Fakkeh
– Dar-e Savin
– I say for the History (Volume II)
– I say for the History (Volume I)