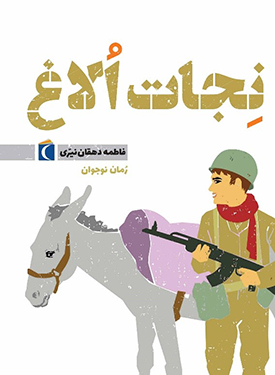 Mohammad, a young Iranian soldier, is being trained to join the war against invading forces of Iraq. He finds a severely wounded donkey behind the front line and tries to save the injured animal. Being under enemy’s attack, it would be a difficult and funny task to carry on. And it becomes more so when he decides to take the animal back with him after finishing his service!  Saving the Donkey has been received very well since its first publication in 2017. Being aimed at young adult readers, who hasn’t experienced the war time, this novel pictures the Iran-Iraq war with a different tone and point of view. It is both humorous and humane.

Excerpt: The injured donkey laid there, its ears hung loose, its breaths short and silent. It seemed to be too weak even to breathe. Like a fish that has been out of water for a while.

Fatemeh Dehghan Nayyeri started her writing career with short stories. Her first collection of stories, Eve out of Paradise, was published in 2008. Since then she has written many other stories: My Grandfather, Ata, Citizen of Heaven, Dream of Flight, etc.