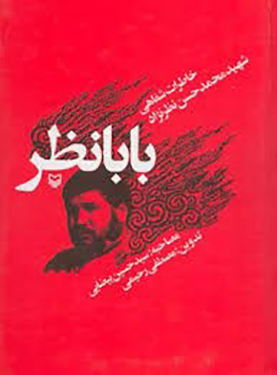 Baba Nazar was an Iranian champion and wrestler who was well known among warriors with his strong and athletic body. He was born into a religious family. He spent his childhood with work and effort in his village. He was very interested in sports, especially in wrestling, and he won positions in this field. He was a virtue, believer, unobtrusive, and modest young man. With the onset of the war, he went to the front with his brother and participated in most of the combat operations. Mr. Nazarnezhad has noted and set in a notebook all the memoirs of the war and his days on the front. He was in the front for seven years and had disability more than 90%. He was shot by bullets and shrapnel shells more than 160 times. Upon the end of the war, he returned to the arms of the family. But the effects of injuries and shrapnel shells in his body forced him to travel to Germany in 1989 for treatment. In 1996, he was assigned a mission to visit the war zones in Kurdistan highlands. But due to cardiac arrest, he was martyred in Kurdistan’s highlands.

“Baba Nazar” book is the result of a 36-hour talk by the writer of the book with the martyr, Nazarnezhad, which has been compiled in 18 chapters. From the beginning to the end of the book, the narrative form is the first person singular and in the words of Mohammad Hassan Nazarnezhad and covers his birth until several months before his martyrdom chronically. In the first chapter, he narrates his family background. His revolutionary activities during the last years of the Pahlavi regime are the other parts of this chapter, which ends with the days of the revolution victory, and the role of Nazarnezhad in this regard is significant. The second chapter is devoted to the revolutionary activities of Baba Nazar in the early years after the victory of the Islamic Revolution. From the third chapter onwards, his memories recount his presence on the fronts of the Iraq-Iran war. In the next chapters of the book, Nazarnezhad recounts the battles and important events of the war in subsequent years and his role and presence in them and explains in detail about each of these events.

Suddenly I saw one of the Iraqi tanks picking up from the other side and firing. The bullets hit in front of me. I rotated two and three meters on the air and hit the ground. My head became heavy. First I felt my head was separated from my body and because my body’s warm I can’t understand! The strange dust was dissipated. My signaler, called Jajarm, raised his voice and said, “Haji has not been martyred! Guys, go ahead. Haji has taken just a scratch. He gets up now and comes.” Suddenly, I saw Mr. Sadeghi and the battalion destroyer standing beside me.