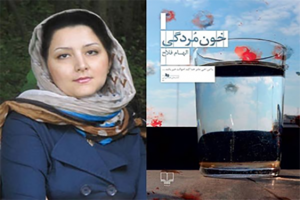 This is different novel in the background of war that depicts the blackness and whiteness of this disaster differently and innovatively. This novel is about the story of a young named ‘Amer’ and a girl that loved him and about a strange destiny that war that is determined for them by war. The author in the present novel presents a new experience from a narration about war in which he merges truths and lies. The setting of the story starts from the war time and continues until now. This novel is the story of a family that during these times encounter many events and incidents that have strong influences in their life and identity. The further the story proceeds, the readers face more incidents and accidents that are sometimes very moving. When the curtains fall down the characters spirits and their real face will be clear and the readers will find out that who tells the right and who the liar is. In this novel war is the setting of story. War does not enter the people’s life and influences on them on their own volitions. It enters people’s life and change it unintentionally and sometimes for reasons except defending homes and the land of one’s country. The protagonist was not in the habit of participating in a war and he was after something else for taking part in the war and it finally determines him his fate.

About the Author: Elham Falah was born in 1362 and was educated in the field of Computer. She loved writing from her childhood and her short stories were published in different magazines. She began writing novels with the book of ‘Winter with the Taste of Sour Cherry’. ‘Samaar’, ‘the Fourteenth Country’, ‘Zaal and Rudabe’ are among her successful novels. She is living with her family in Tehran at the present time.