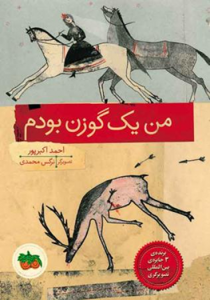 Winner of three international awards in 2009 and 2014 (First prize of Korean Illustration awards, Illustration Contest of Portugal, and Sharjeh’s Illustrated Book of the Year), I Was A Deer is the story of hunters and prey; a concept as old as first hunters and gatherers on the face of the Earth. The author tells the tale of a deer, hunted during the hunting games of a king. The illustrations masterfully depict the ups and down of life as a wild deer in the meadows. Nowadays, there are many disputes over the pouching of wild animals, and this story can bring about the right discourse for children, for it is narrated from the point of view of a wounded deer. In I Was A Deer, after we read and see the beautiful life of wild deer, there comes the king and his companions, who with their bows and arrows, hunt down the animal just for the fun of it. However, the king himself becomes the victim of his hunting, when he’s thrown down from her horse, whose rein is tangled in the branches of a tree. The deer, lost and in pain, tries to free the horse, and that’s when the king’s daughter comes along. She takes the wounded deer to the palace and look after it, but the poor creature dies. This perhaps can be the most touching part of the story, for the deer is still talking to the readers, mentioning that he misses his family and friends: I am a deer, but a dead deer, But I still long for my kind to wander around in the meadows.