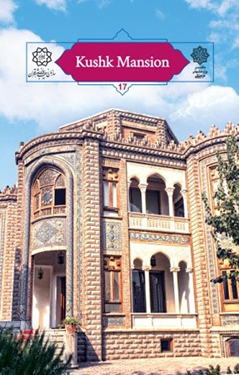 Kushk Neighborhood, surrounded by a series of historic areas and monuments including the very first hotels of Tehran (namely the Grand Hotel, Lâleh Hotel and Caravan Hotel), Nasr and Dehqân Playhouses, as well as Ettehâdieh and Pirniâ Mansions, is part of District 12 of Tehran Municipality.

Kushk Mansion, which has given its name to the street and neighborhood where it is located, was designed and built by Hoseyn Shaqâqi, one of the first Iranians to obtain a diploma in civil engineering from France, benefiting from the first governmental scholarship for students to pursue their studies in European universities. The building is considered a remarkable sample of the transitional period of architecture in Iran, mainly influenced by Art Deco and Art Nouveau styles of early modern era.

Following a brief introduction of the history of the district, the book focuses on Kushk Mansion’s architectural and structural features, details and ornamentations and its evolution over time.

The book in hand is the 17th volume of a twenty-title series published as an output of Tehran Studies Project at Cultural Research Bureau. These books were designed to provide both authentic and interesting reading material on the historical, architectural and cultural aspects of Tehran’s prominent monuments and urban spaces. The series was recently translated into English for English-speakers willing to expand their knowledge about the history of the present Iranian capital.

Position of the monument in the historical center of Tehran

The historical location of the monument

Structural features of the monument

Evolution of the monument over time

Architectural features of the work

Samira Behrouz (1983/Tehran) holds a Master of Planning in Urban Development (2014) from Ryerson University of Toronto, a Master of Historic Preservation (2011) and a Bachelor of Architecture (2006) from Azad University School of Art and Architecture, Tehran. She has 4 years of experience in heritage planning in Tehran, and has worked on several research projects about Tehran’s contemporary built heritage. She worked with the City of Toronto for 3 years focusing on urban heritage, public realm and urban design studies. She is currently a New York-based planner, working as a manager of projects to improve the public realm in the city.