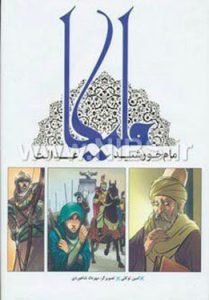 The Roman Empire was one of the greatest governments of the ancient world. Its boundaries stretched throughout the entire Europe, parts of Asia and today’s Arab world. Its center was Rome (the capital of the modern Italy). The Romans believed in many gods. They opposed Christianity which once emerged in part of their territories. However, eventually, in 312 AD (the time of Constantine’s rule), the empire also accepted the religion of Christ. The central control of the Roman Empire was transferred to the city of Constantine (Constantinople), today known as Istanbul located in Turkey. With the spread of Islam, Islamic and Roman territories were bordered and there were numerous wars between the two powers. In some of these wars, Muslims, and in others, the Romans won and took prisoners of war. A war broke out between the Romans and the Muslims in the year 867, in which some Roman princes and courtiers were captured by Muslims. One of these captives was called Mellica (Milique), the Great Roman Kaisar’s granddaughter.

In this book, you will learn about the story of Mellica’s life and the strange things that happened at her wedding aimed at preventing her marriage to the Roman princes. In continuation, the story of how she was captured in the war and her transfer to the land of Muslims and her marriage to Imam Hassan Assgari (a.s), as well as becoming pregnant with Imam Mahdi (a.s), the last Imam of the Shiites. The book is narrated in a Comic Strip way with beautiful illustrations as well as simplified sentences that are comprehensible for both children and adolescents alike. The book is based on the subject, content and style of narration as a unique work on the subject of children and adolescents while capturing the attention of many readers by finding its way in the list of bestsellers in Iran.