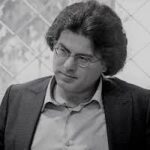 Mohammadreza Sharafi Khaboushan is one of the young talents of Iran’s contemporary literature who has become relatively well-known among Iranian audiences by authoring fiction books that contain new initiatives in terms of the language they use. He is well-versed in poetry in addition to storytelling and has so far published two collections of poems. Beyond the two prestigious Jalal Ale Ahmad and National Book of the Year awards, Sharafi has managed to nab the Golden Pen Literary Award, the Shahid Habib Ghanipour Award and the Holy Defense Book of the Year Award in Iran.

Some of his books: 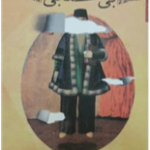 ◙The winner of the book of the Islamic Republic of Iran, 2016

Abstract:  Mirza Ya’qoub, a specialty salesman, an antique dealer as well as a middleman (broker), is very keen of manuscripts and stone printing of books and is willing to spend any money a lot on books. His only hobby and entertainment are dealing with books. He peers in alphabetic letters, he peers in words, as if touring and taking a trip with them. He also peers in Kufi scriptwriting. He is willing to go that extra mile. He even goes a long way on this route and is willing to risk his life to this end, while sparing no efforts to find what he wants. Mozzafar al-Din Shah’s was very careful that nobody would see his books; he was greedily interested in books with a zest. Now, as time passed, Lessan al-Dawlah had somehow inherited those rare royal books and was selling them to get his greedy hands on the money. Mirza Yaqoub, who had been interested in books (and scriptwriting) since childhood, visits a house to get his hands on some valuable books but finds the landlord dead. He has been murdered. Zakiye had already brought a special book for Mirza Yaqub to sell to him which was an exquisite manuscript, a golden-edged Divaan-e Hafez handwritten beautifully in an exquisite fashion. Mirza intends to get his hands on the copies that Lassan ul-Douleh has concealed. After Muzaffar al-Din Shah’s demise, the next king fires Lassan al-Dawlah from the royal court and collects the key to the library from him before handing it to somebody named Mirza Mahdi. Subsequently, Lassan al-Dawlah is coerced to steal books from the library.

Abstract: Alborz with a congenital defect in one of his legs was the playmate of Nazli, the Brigadier General’s daughter.  When Nazli grows up like Alborz gets involved in the field of painting. The two intimate friends become closer to one another not only due to their interests in the art of painting but also emotionally. However, later on, Nazli took away from Alborz and chose her own lifestyle which ended in (a marriage and) divorce from her husband. Following that Nazli steps on the road of nonchalance, irresponsibility, and laziness. Nazli is flying to Europe in compliance with her father’s wish and decision. But just before setting out for her last journey to Europe, she finds her father’s behavior suspicious. She asks, her childhood playmate, Alborz to keep not only her father under surveillance but also keep an eye on the commuting of anybody to their villa and garden when she is away in (during her absence). In order to comply with Nazli’s instructions, Alborz secretly keeps everything under surveillance, including the commuting of anybody to the villa and garden and the general’s activities. He must also discover whether the general will bring home any woman in the absence of Nazli and her mother. Subsequently, during his mission, Alborz noticed a well and cellar which is the secret of the general’s suspicious operations (movements). Finally, the stinking smell of the accumulated dead bodies went out of the well and the general together with his allies tried to get rid of the smell by pouring gallons of acid inside the well. Alborz found out the secret by hiding in the room of the general’s daughter eavesdropping the conversation of the sergeants and the General. Alborz went out of Nazli’s room and heard a sound from the well.

Title: Your Hair is the Nest of Fish

– Selected in Fifth Festival of the Revolutionary Story in the Teenage Section, Iran, 2012

Abstract: “Your hair is the nest of fish” is the narration of a teenager who lives in a village near Varamin. During his meditation, an Arab girl appeared before him in a revelatory way and says strange things about an ambiguous time and place.  Sometimes she refers to a not too far event and sometimes to a near event.  The boy follows the girl as his adolescence curiosity and due to his truth of heart, he longs to discover her secrets and words and thus faces problems normal for his age. The problems were such as the classmates’ reactions and not being taken seriously by adults, etc. this revelation ends in a tragic incident in Vakilabad village of Varamin and he witnesses a massacre which is the source of a huge evolution in the birth for the future years. This little child (as if traveling in time) travels from the year 687 to the year 1964 and the adolescent of the story finds her and gets acquainted with her. This girl narrated the story of Ashura and the adolescent simultaneously visited (what had taken place) in 1964. The main story of this girl is when Bani Assadi tribe presented in Ashura event; they faced with the abandoned bodies of the martyrs lying on the ground. Many girls and women participated in their funeral ceremony.