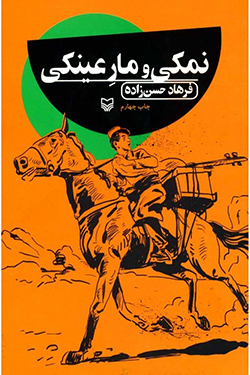 Namaki and his friend Teimoor are performing their play before a crowd of loitering people in the square of the town. They have a chain and keep spinning it for the audience and they break open a padlock with bare hands and then they show a snake which has been tamed. But nobody is really willing to pay a penny/ anything for the games of this show. Namaki’s serpent is Indian and friendly and in very good terms with Namaki. It is an intimate friend and amuses the spectators by playing games. His performance and games are very interesting. However, sometimes it is being naughty and refuses to get along and obey the boss. One day when Namaki and Teimoor are performing on their stage and the people, as usual, are standing around them and staring at them watching them very carefully, nobody puts his hand in his pocket to bring out any money for them. Suddenly city reporters arrive in the square while spoiling their performance, announcing king’s declaration and while yelling, read the news, “Seven burglars and thieves have stolen seven precious pieces of ruby from the King’s palace. They have escaped. Anybody who contributes in arresting these burglars and delivering them to the King will be given three pieces of those precious ruby stones as his prize. Namaki and the snake who wears sunglasses decide to set out for the city to find the burglars. Namaki considers himself to be forty years old. He always says, “I am 40”. Although only a teenager he pretends to be forty years old. He thinks he is very clever, intelligent and wise. He proves that he can cope with any obstacles set before him. Therefore, with the help of his snake who is wearing sunglasses he sets out to achieve his goal and starts the mission, He finally identifies the thieves one by one. He arrests them and hands them over to the King. His talking is eloquent and fascinating and he fascinates everybody.

Namaki and the snake who’s wearing glasses is a tale of a teenage boy who thinks he’s 40 years old or pretends to be 40 years old and sets out to the city to find the seven burglars of the ruby stones. They go to the village and then to the city (to look for them) and over there get involved with weird adventures which are sometimes funny. The book of Namaki includes 12 chapters. Farhad Hassanzadeh, the writer of this book, is actually rewriting very old folkloric stories. He has succeeded to present them in the new version and he has written them very beautifully. Intelligence, smartness, honesty and justice are concepts which stand out in this book. The literature is based on fiction and imagination and the application of story in another story is a structure applied by the writer in this book. The writer has used a fine irony in writing this book. As in his other books he has a social and critic’s look at the today’s problems making the book more educational for teenagers. The animation of Namaki and the Snake with glasses also has been produced in an animation film.