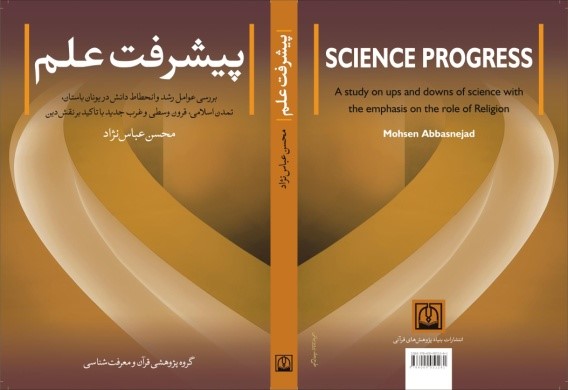 Title: The Advancement of Knowledge

This book starts with a discussion over the main human expectation from the development of knowledge which is: Increasing one’s knowledge regarding the universe and the human being – Individual well-being with the advancing technology-Providing the required grounds for social peace and stability.

The most significant periods in the history of science are then singled out, the scientific records of which would separately been examined through the critical analysis of the reasons behind its progression and/or decline. Ancient Greece is the first significant period in the history of science. Scientific communications, manifestations of democracy, high social status of scientists, the establishment of the academic institution, and relative well-being are considered as the most important reasons of the progress of science in the Greece. According to the records, the role of disbelief in divine religions in Greek knowledge would then be carefully investigated.

Another chapter of the book is devoted to studying the Islamic civilization. Honoring Wisdom in the religious teaching, problem raising, opposing superstitions, offering scientific and civilization-building teaching, religious requirement, vast communications and… are regarded as the  main reasons for the development of knowledge in this period. The role of religion in the development of knowledge in the Islamic civilization and the reasons behind in decline, especially the influence of the ruling establishment and the rise of anti-reasoning currents are some other issues studied here. Medieval age is another historical period whose records in science and the factors involved in the downturn of knowledge in the west, the role of religion and Christian teachings are critically investigated. The modern west is also studied based on historical documents, elaborating on the key factors contributed to the fast scientific development of the modern age. Among the factors for the prosperity of the knowledge in this arena including: Christian teaching, the weakening of the Church, efficient academic system, economic growth, familiarity with Islamic legacy, and…… .

However, the author examines the dominant role of religious aversion on the destructive aspects of the western technology and its social crises, and the effect of the separation of knowledge from religious beliefs on the knowledge-increasing potential of the modern sciences.

Chapter I: The Period of Ancient Greece

-The Factors of Development of Knowledge in the Ancient Greek

-The Role of Religion in the Record of the Greek Knowledge

-Factors of Scientific Flowering in the Islamic Civilization

-The Role of Religion in Knowledge in the Islamic Civilization

-Decadence of the Institution of Rule in the Islamic Civilization

-The Causes of the Scientific Decadence in the Middle Ages

-The Role of Religion in the Knowledge of the Middle Ages

-The Factors of the Scientific Development in the Modern West

-An Examination of the Role of Religion in the Modern Science