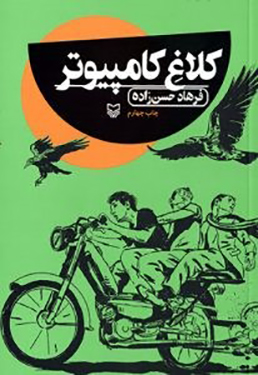 The story starts when a father of some children buys a used computer (second-hand PC) for one of his children.  They find a very mysterious software program on the computer. This program is related to the crows related to the anti-activities of organized crime (anti-violation and anti-criminal networks. Now children organize a team to identify the criminals. Mansour finds a new program in his computer in which some messages are given to him by crows. In reality, the program defines and assigns some missions to him, based on four principals: goodness, faith, honesty, and righteousness.   On this base, he and his friends are set on a mission to reveal the evils (by embarrassing them and making a scandal of their activities) and serve people by spreading goodness.

The author’s approach in this book is the genre that has tempted in today’s literature. The book is also a kind of critique of social behaviors in urban life. Although this critique is in the form of exciting missions for children, such as finding someone who spends his garbage on the premises every night and contaminates the environment … “.”The Crow of Computer” is an elaborate story not overwhelmed the complexity of science or the official critique of social shortcomings, because the author here is only storyteller. He uses a comic with a happy and intrusive way and makes it simple and easy for children to understand their own community’s problems.

Mansour angrily pounds on the table yelling: “You stupid! What is a game? These are recorded data on a CD, which I’ve received from the Crows who are liaisons between us and them. He gave it to me. They are real. The boys, startled and quiet, each of them looked at spots in different directions. Mansoor who broke the silence announced: “OK now do you believe it? Tooraj said: “What is our duty?