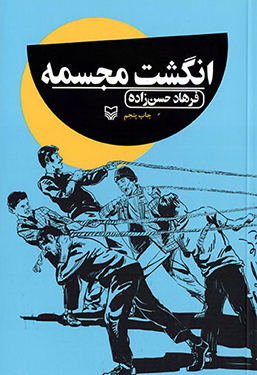 A Sculpture’s Finger is a long story about the adventure of which is related to the pre-revolution era. The main character is Jamil, a young male activist during Pahlavi’s era who opposes and fight against the regime. His father was martyred in 1963. Jamil finds out that his own maternal uncle was involved in arrest and murdering of the father. The past is a vague and ambiguous darkness for Jamil. The truth and the reality is not enough to bring him into the light. A stranger calls on them at night, during curfew and Jamil’s mother introduces him to Jamil as his uncle Ashraf. Everything starts with the presence of this stranger, who used to be a colonel in SAVAK (the intelligence agency of shah’s regime). Through his suspicions, investigations, fears, and hatred he finally discovers that the uncle has been the murderer of his father.

This book is a movie-script type of writing.  The mentality of the writer is picturesque. While writing, as if he is sitting in a movie director’s seat and setting the movie camera in the proper angle, while applying idiomatic terms, demonstrating the scenes and occurrence, helps the reader to realize his/her mentality to reality. The topic of A Sculpture’s Finger is actually about Jamil’s dilemma and inner quarrel with himself, for revenge. As Uncle Ashraf, on one hand, is a murderer, on the other hand, he is the brother of a mother who has gone through many difficulties. She is so merciful that she is even caring about his own husband’s killer. Such a duality is the meat of the story. A point which describes Jamil with all his characteristic aspects and inner emotions. Where you/he must draw a line between enemy and friend. However, the writer is very well aware of the fact that the dilemma is very difficult when the enemy is your nearest relative. The characters talk in a southern Iranian accent, while their dialogues make the geographic spot more intimate and more tangible. The present book is the story of a cruelty and oppression the remainder of which is nothing but a Sculpture’s Finger made of cement left in children’s hands. At the end of the story pointing the finger to Uncle Ashraf unveiling his face who is a servant of the man whose sculpture has the broken finger (Statue of Shah).

In a page of the book we read:

He releases his cold hands and he walks faster. On the way home, he thinks when his mother finds him in those clothes she will complain and will beg him not to follow this risky story (investigation) anymore. Then she picks up the kettle from top of the heater to pour hot water in fingerbowl and mix it with cold water to help Jamil wash up . But what is his mother really doing now under the soft bright light coming through the window and through its blue curtain?